Illinois The pumpkin Capital of the world 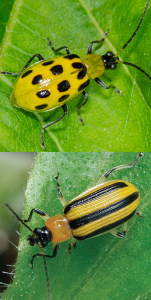 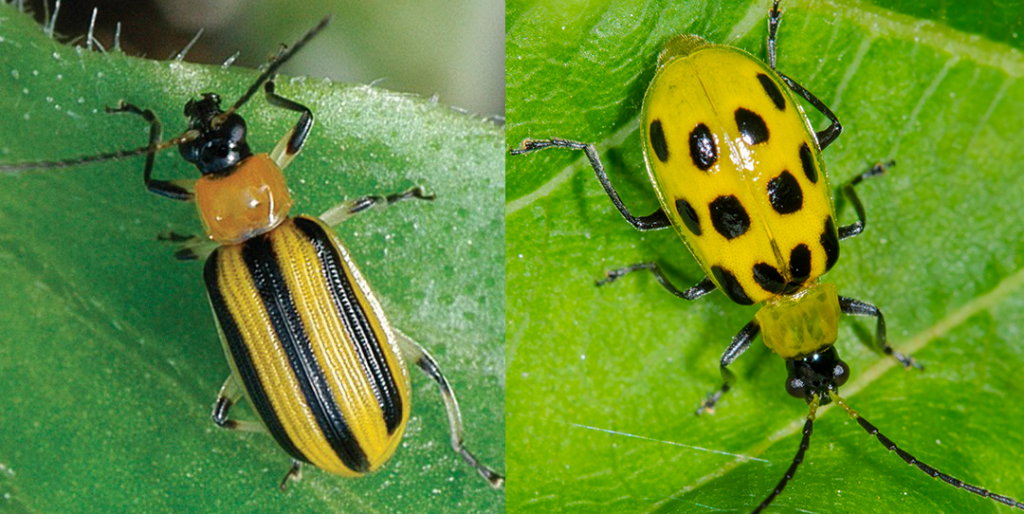 The Monsters in your garden

In Illinois, one of the most common insect pests you will encounter on your cuburit crops will be the Striped cucumber beetle and to a much lesser extent the Spotted cucumber beetle.Both types damage your plants in the same way and are controlled in the same manner.The Striped C/beetle is just under ½ “ and the smaller Spotted  C/beetle is approx ¼” long, the Striped C/beetle has a black underside and well-defined stripes, not to be confused with the Western Corn Rootworm that has a yellow underside and blurry stripes.The Spotted C/beetle is yellow-green with twelve black spots  a black thorax, and yellow abdomen

Striped C/beetles overwinter in the soil and in woodland litter, they emerge and immediately begin feeding for several weeks in April and June preferring vine crops but will eat whatever is available.After feeding, mating will occur with the females laying eggs at the base of plants, the larvae hatch and feed mainly on roots for 2 to 4 weeks but they can eat any portion of the plant or fruit that is touching the ground, they then pupate and emerge as adults in July to early Sept.Two generations can occur in the southern portion of the state.

The spotted c/beetle does not overwinter in Illinois and migrates from the southern states building up in numbers around mid-August, and reproduce once, in the northern part of the state they may not occur at all. Studies showing early arriving spotted cucumber beetles may suggest that some overwinter in Illinois

Both the striped and spotted cucumber beetles can cause substantial damage to the garden, being prepared for them is a must, just one infected cucumber beetle can spread bacterial wilt and mosaic virus which can make the plant more susceptible to Gummy Stem Blight and possible Powdery Mildew.Once a  cucumber beetle feeds on a plant inflicted with bacterial wilt or mosaic virus it can pass that on to other plants it bites, and it only needs to be one bite to do so., Most large plants can survive this but a substantial part of the plant can be affected this area should be removed and taken off the property, or disposed of properly to not spread the disease.

Window paning of leaves occurs when the underside of the leaf is eaten but not through to the top which will then turn brown and die, older plants can withstand more damage than younger ones, plants that have just emerged can be totally destroyed from root, stem and cotyledon damage.If wilting occurs it can be a sign of bacterial wilt.

There are very few predators of the beetle with one type of soldier beetle being the most effective predator.The tachinid fly and braconid wasp attack adults and larvae can be killed by certain nematodes, row covers are effective but must be removed if allowing bees to pollinate.Some see success with garlic sprays and traps. Yellow flowers can be an attractant and favorite food,  removing these can help reduce cucumber beetle populations. Some work has been done with Kaolin Clay a powder mixed with water and sprayed on plants to form a sticky barrier that clings to the cucumber beetle, they spend more time cleaning themselves than eating, try looking for a product called Surround.

Follow directions and your state and local laws when using insecticides, you may want to contact your local cooperative extension office to obtain a private applicator’s pesticide license they will teach you the proper application of chemicals and how to handle them safely.

Chemical control seems to be the most popular method among Giant pumpkin growers, Systemic pesticides containing Imidacloprid can be very effective against chewing insects but the damage and possible infection of a disease have already occurred before the insect dies. Sevin, an old favorite isn’t as effective and can kill earthworms, the more widely used active ingredients Bifenthrin  Permethrin and  Myclobutanil work very well with Bifenthrin possible being the favorite.Caution needs to be taken to prevent exposure to bees